Please read our declaration again and again, as it is constantly being updated.
You are here: HOME → Surroundings → Heritage Nature Park

In the Garden of Pannonia

The World Heritage Nature Park Neusiedler See Leitha Mountains lies in the heart of Europe, at the transition between the Pannonian lowlands and the foothills of the Alps, on the shores of Europe's largest steppe lake. There are five small towns in the region: Donnerskirchen, Purbach, Breitenbrunn, Winden and Jois.

The World Heritage Nature Park Neusiedler See Leitha Mountains is characterised by the soft transitions from the steppe lake to the gentle slopes of the Leitha Mountains. The small cultural landscape is dominated by wine-growing and cherry trees. The village centers fascinate with their historic buildings and the proverbial Burgenland´s cosiness.

The town centers of Donnerskirchen, Purbach, Breitenbrunn, Winden and Jois have their own atmosphere, they breathe history and they are full of pulsating life. The must-see places include: narrow meadow, barns row, fortified church, stretching farmhouse, cellar lane and stork´s nest.

Between the sunny, wind-protected south-eastern slope of this foothills of the Alps and the shores of Europe's westernmost steppe lake, residents and holidaymakers alike enjoy all the benefits of the Pannonian climate: hot, dry summers and short winters with little snowfall.

The landscape of the nature park is characterised by cherry trees and wines. The cherry blossom has given the region its name. Today the viticulture is predominate in the region. In the high-quality gastronomy enterprises regional products are processed and offered to guests. The gastronomic specialties of the region include: game, mushrooms and bear's garlic from the Leitha Mountains, small game such as pheasant and rabbit, fish from Lake Neusiedl, first-class wines and fruit brandies, products from cherries and other regional fruit varieties. Wine and culinary delights become the region's real core business.

The combination of carefully grown villages and towns in an old cultural landscape makes the Neusiedler See – Leitha Mountains Nature Park an extraordinary region. The region owes its diversity today to human management. There, where a man retreats, dominant plant species gain the upper hand. Pastures and fallow land become overgrown, lakeside meadows become overgrown by reed, plant and animal species lose their habitat. The long-term goal is to protect and preserve the region's small-structured cultural landscape in order to convert it into a model region for sustainable agricultural usage.

The region has been inhabited since the 6th century BC. Important finds from Celtic and Roman settlements have been preserved. The Western Roman Empire left the region to the nomadic people of the Huns. The Ostrogoths followed, the migration of the peoples brought Suebi and Herules, Lombards and Avars to the region. After 900 the Magyars ruled the region. The region was devastated several times by the passing Turks. The 18th century was the undisputed cultural heyday of the region. Economic boom led not only the nobility to lively building activity, but also villages and towns was given their present appearance.

The area of the Neusiedler See Leitha Mountains World Heritage Nature Park lies in a region of the highest international reputation and has received numerous international awards.

Worth visiting in our neighboring towns

The village, only about 1 km north of Breitenbrunn, captivates with two special highlights. The first highlight is the largest natural cave in Burgenland with Ice Age fauna, the Bear Cave. The Bear Cave is situated at the foot of the Zeilerberg, north of the village. This listed cave can be explored to a depth of 60m. This is where the ice-age cave bear once lived. Nearby there are also the gypsy caves. The second highlight is situated just northwest of the town center, where you will find the sculpture park, the exhibition pavilion, the egg collection and the studio of the world-famous artist Prof. Wander Bertoni. His extraordinary sculpture "The sun worshipper" makes the place recognizable from afar. 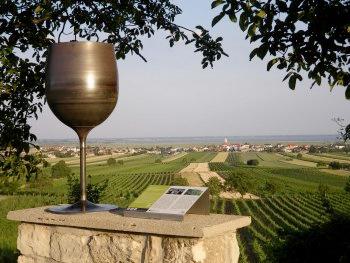 Jois is situated just 3 km away from Winden and the village is famous for its heart cherries. Northwest of the town center via the Joiser Haide you reach the Ochsenbrunnen - a small pond decorated with water lilies in the middle of a picturesque natural landscape that makes every romantic heart beat faster. Do not forget to visit the Teufelsjoch, where you will find the hill graves of the Early Bronze Age. On the way to the village center you pass the informative wine trail. The Hexenbründl is located on the route between Jois and Winden, directly on Lake Neusiedl. If you take the cycle path B 10, you will find this beautifully landscaped fountain with a modern sculpture just on your way.

Purbach is a small "town", just about 4 km south of Breitenbrunn with a lot of historical buildings. On the main road near the main gate there is a chimney with a stone figure at the small house on the right, which only shows the upper part of the body. If you take a closer look, you will discover that the figure has a turban, so it is a Turk of whom one tells an ancient story. If you drive through one of the 3 Turk's gates in the fortified wall into the center of the village, you come to the Raiffeisenplatz - formerly "Orientplatz" - named after the probably most famous Purbach citizen, Josef Orient. He was born in 1677, studied painting and worked as deputy director of the Academy of Fine Arts in Vienna in 1742. 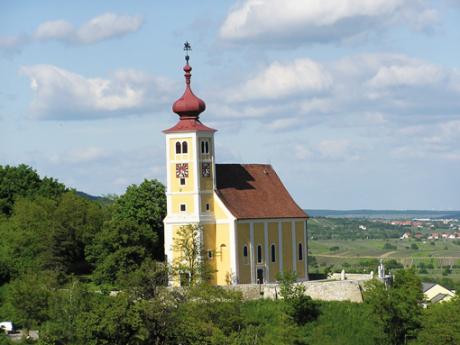 From Purbach, after a journey of about 4 km, you reach Donnerskirchen, where a fortified church above the village is visible from far away. The parish church of St. Martin was built on the foundations of a medieval church. The baroque building stands on a reinforced terrace from which one has a fantastic panoramic view over the lake deep into the puszta. An experience of a special art is the boat excursion through the reed belt to the Wulka delta. On this excursion you will learn a lot of interesting facts about Lake Neusiedl and its inhabitants under the guidance of local biologists. You will also have the opportunity to experience this unique habitat up close.