Please read our declaration again and again, as it is constantly being updated.
You are here: HOME → Nature experience → Lake of Neusiedl

Lake Neusiedl is the westernmost steppe lake in Europe and at the same time the largest lake in Austria. The total area of the lake, including the reed belt, today is about 320 km², of which about 4/5 are located on Austrian and 1/5 on Hungarian territory. 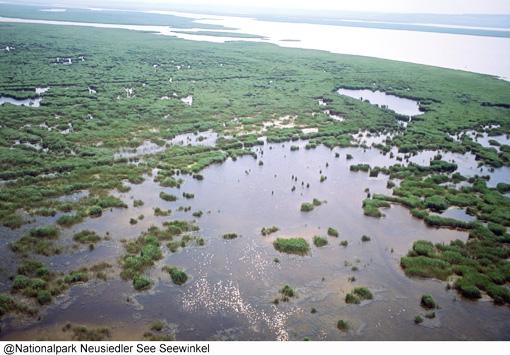 In addition to its role as a climate regulator and habitat for many plant and animal species, the lake is of great importance for tourism. Its proximity to the big city made it the much-quoted "Sea of Vienna".

As a true steppe lake, Lake Neusiedl is characterized not only by its shallowness, but above all by its unusual water balance. More than 80 percent of the lake's water is fed by precipitation. The only significant above-ground tributary is the Wulka river. The estuary area is situated on the southern edge of the World Heritage Nature Park, between the municipalities of Donnerskirchen and Oggau - is a natural jewel hardly influenced by man due to its limited accessibility, which is characterized by the natural meanders of the Wulka river.

A lake in transition

Lake Neusiedl is subject to a constant dynamic. It is assumed that the lake has dried up about 100 times since its formation. Last time it was dry from 1864 to 1870. These constant water level fluctuations are based on the ratio of the lake surface and the comparatively very shallow depth.

Even though both surface tributaries, such as the Wulka river and groundwater outlets, so-called Kochbrunnen feed the lake, the water level is primarily determined by the weather.

After the low level at the end of summer, the water level rises in autumn with less evaporation and higher precipitation. The Einser Canal, an artificial drain through which the lake drains via Rabnitz and Raab to the Danube, today prevents major flood catastrophes after very heavy precipitation, as they occurred several times in the past.

The natural fluctuations in the water level of Lake Neusiedl caused very different expansions in the past. The spectrum ranges from complete dehydration to over 500 km² in size.

Some figures to illustrate the size and characteristics of this steppe lake, which is only about 1.5 m deep, are as follows:

The lake and fishing

Lake Neusiedl provides a habitat for about 30 different fish species. The greatest diversity of species is found near the reed belt. The lake is home to fish such as pike, zander, wild carp and catfish. There are also some white fish such as stickleback, perch, white bream as well as the ruffe.

Lake Neusiedl is also home to several species of fish that originally came from other waters and were put into the lake by humans. A representative of these fish is the eel, whose new stocking is forbidden in the meantime.

Professional fishermen are authorized to fish in canals and open water. In comparison, sport fishing is only permitted in open water.