Please read our declaration again and again, as it is constantly being updated.
You are here: HOME → The ideal place → Places of interest

There are plenty of interesting things  to see in the region, be it the many sandstone applications of the old townhouses and farmhouses or the sgraffito paintings on Renaissance buildings. Don't forget to take a look at  the many beautiful inner  courtyards and gardens, in which many contemporary witnesses of the Pannonian building culture can still be found.

The culture trail has more than 50 stations. From museums, churches and wayside shrines to listed town houses and farmhouses. A tour is definitely worthwhile, as all the stations have information boards that reflect the origins and history of the area. With open eyes one finds many small details which make the place so interesting. The main highlights of the cultural path are now highlighted here. 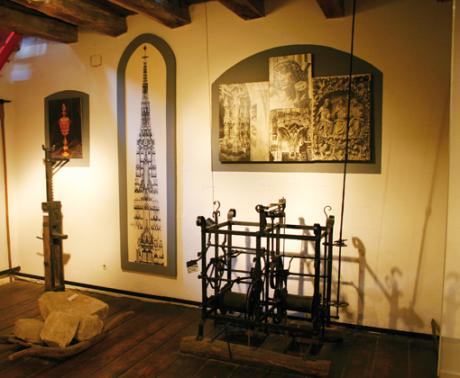 In the 13th century as a residential tower and later converted to a defensive tower, landmark of the village is the 3-storey tower museum with interesting regional exhibits, such as the skeleton of a cave bear. The museum was established in 1969 in cooperation between the Burgenland Provincial Museum and the market municipality. There you can find  the oldest tower clock in Burgenland - one of the last single-handed clocks. You can admire the skeleton of the Winden´s cave bear as well as old tools and coins. On the top floor there is a multitude of information boards about the hydrogeology and history of Lake Neusiedl. From the balustrade you have a wonderful view over the town center and the Hungarian lowlands.

Parish church of the Holy Cunigunde

Parish church of the Holy Cunigunde is an old  Baroque building, on the southern edge of the market municipality within a fortified churchyard dating back to the 17th century. The fortified churchyard also houses the old cemetery. The churchyard is still partly equipped with fortified walls and bastions.  The church was built in 1675 by Georg Wimpassinger (pupil of Lukas v. Hildebrandt) using medieval masonry. Unfortunately, in 1683 it was severely damaged in the Turkish Wars and almost completely destroyed by fire in 1737. In 1802 it was equipped with baroque altars. The organ, built around 1785, became a full-fledged instrument through the later addition of the pedal.  The altarpiece - a foundation of Prince Paul Esterhazy - represents the glorification of St. Cunigunde, who is not only the patron saint of the church but also the patron saint of pregnant women and children.

The Edelhof is one of the oldest town houses in Breitenbrunn, which was able to retain its charm with Schwibbogen arches, a Gothic vault and a secret passage. Edelhof is a type of aristocratic building, which mostly originated from medieval knight's courts, so-called "curia". In modern times, knight's courts were converted into feudal residential buildings and lost their fortified character. In Breitenbrunn's archives, residences of lower nobilities  have been mentioned since the 15th century.

It almost borders on a small miracle that the property in Kirchengasse 28 has apparently been spared from military incursions and also from the four major fires that raged in Breitenbrunn between 1597 and 1748. The date 1589 on the gable above the bay window refers to a late Renaissance construction and the stucco decorations of the sgraffito and also indicates a proximity to Mannerism, the last epoch of the Renaissance. The colliery in Breitenbrunn was probably built as the residence and workhouse of a religious brotherhood and belonged to the parish church dedicated to Saint Cunigunde.

Here you can download the map with all stations of the cultural route. We will also be happy to send you a printed copy of the plan, simply request it under the menu item "Request brochure".